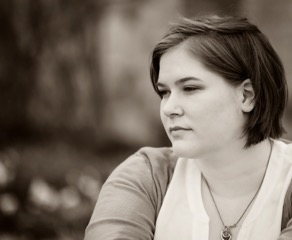 So I’m hanging out at this gathering of semi-local authors a couple months ago and what to my wandering eyes should appear? But a room full of creative types who like to drink beer. And rum. And bourbon. And wine. But I digress.

One of those creative types (whose drink of choice I completely endorse) has just released a new book titled, On A White Horse. Author of 20(!) books in all, I am joined today by the prolific, the talented, Ms. Monica Corwin.

Welcome Monica! Please tell us a little about yourself, your books and what we can expect when we pick one up.

Well I’m a twenty-nine-year-old single mother. I started writing seriously during my time in the military and have never really stopped almost 10 years later. I have a three-year-old daughter, twenty typewriters, and more books about King Arthur than my local library.

I mainly write paranormal romance, but occasionally I dabble in contemporary erotica if I need a change. When you pick up one of my books you should expect an NC-17 rating and a kick-ass female character. Other than that it’s a free for all. I love the paranormal genre because I can go anywhere, do anything, put my characters in limitless situations. I think this is something my readers value in my books. 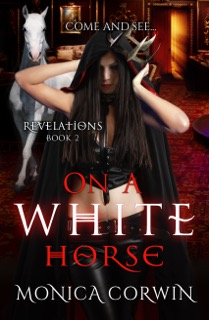 You’ve just released the second book in the Revelations Series, On a White Horse, with plans for two more. Can you tell us about that series specifically?

This series is a fun one. Basically the four horsemen of the apocalypse (who are actually women) decide they don’t want to end the world and start trying to live human lives. But, as usual when immortals dabble with humans, things happen and plans go awry. The first book, On a Red Horse, featured War. On a White Horse features Conquest. The third will focus on Famine and then the fourth on Death.

Paranormal romance is a growing and very popular genre these days. Can you tell us what it is about the genre that interests you?

As I mentioned before it’s limitless. I try to go outside the box. In my books readers will find sci-fi elements (like in my futuristic paranormal series The Soul Program) and I’ve even been known to do some time-travel (King Takes Queen). Paranormal romance isn’t just the vampires and werewolves everyone assumes. It can be so much more. 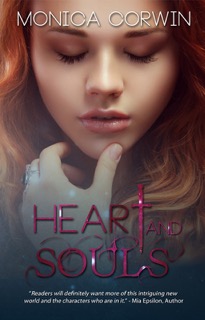 Now when you curl up with a glass of wine and a good book on those cold winter nights (and there are a lot of them in Northern Ohio), do you primarily pull from the paranormal romance bookshelf? And if not, what other genres do you pull from?

Well I do read a lot of PNR because I believe strongly that to write in your genre you should know what’s out there (and I enjoy it). I also love fantasy novels (Anne Bishop, Jacqueline Carey, Terry Brooks), YA novels (Julie Kagawa, Maria V. Snyder, Kelly Creagh, Maggie Stiefvater), travel memoirs, beat novels, non-fiction biographies. I pretty much reach anything that looks interesting to me. That’s how you find the best stuff.

Have you ever dabbled in fantasy or YA as a writer?

I’ve not ventured much outside PNR. It’s easy to write what you know, however, I do plan on maybe trying my hand at a mystery or spy thriller one day. When I get more courageous.

I have numerous writers in my audience, Monica, and if they’re anything like me, they’re probably interested in hearing how other writers operate. So what is your writing routine, and are there certain atmospheres or objects that help bring out your muse? A certain type of music in the background, a special mug with a special something in it, etc.

Oh man. I was just talking about writers and their routines the other day! I don’t really have a set routine. I find I work better at night so usually I will sit down and write at 9pm or so. I also write better outside my home (if during the day) so a jaunt to the local coffee shop is usually in order when I’m trying to crack down on my word count. Other than that I usually like to have a beverage (usually coke) but nothing really necessarily specific.

Now, before I let you go, I’ve learned that besides reading and writing, you have a couple of very intriguing interests, one of them being pencils. The other, which I find very cool, is your passion for antique typewriters. Tell me how you were first drawn to this hobby and a little about your collection.

Well, it fits right in with this interview! I was smack in the middle of the worst case of writers block I’d ever been in. I hadn’t written anything for months and for you writers you know how awful that can be. One of my friends suggested I try something new…write a different way. I thought about it and found a dirty pre-war (that’s WWII) on CL for $20. I cleaned her up and that was one my best writing days ever. I now have WAY more than I have room for but they all have different typefaces, different key strike feel, I can’t have just one. I do love pencils as well. I like to handwrite sometimes too when I’m not feeling words. Sometimes you just sit down at the computer and think ‘nope, not gonna happen’. That’s when I like to hand write. It sort of connects you physically with the paper and the words.

Finally, what’s coming up next for Monica Corwin, and where can we learn more about you and your books?

Well I’m currently working on a stand alone paranormal romance called In My Blood because I need a little break from my two main series. After that my next book will be the second installment of The Soul Program called Sins and Lies. This one is fun because it’s a futuristic take on Dante’s Inferno with a reaper and a sin eater. If you want to keep an eye on what I’m working on check my Pinterest. I always story board there when I begin a new project.

My links are as follows: